What is Success with Anthony About? – Does it really live up to the hype? 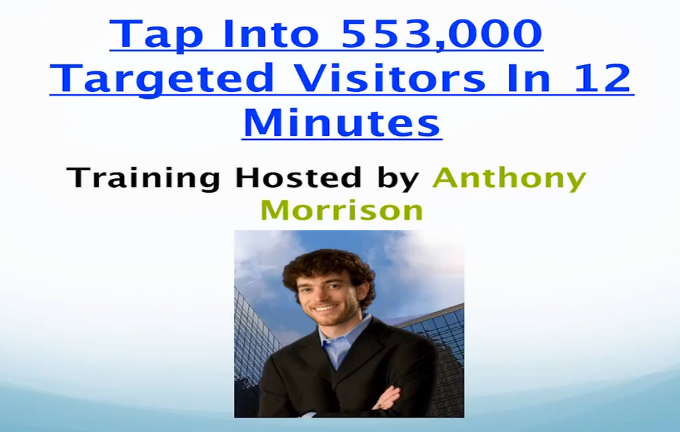 I have to admit, I have heard of this so called Success with Anthony program before but never thought of making a review because there are already many signs showing that it’s downright a scam.

The first sign I encountered which I’m sure many of you would have known, is the fact that the video wasn’t clickable because Anthony wanted you to sit through the whole entire length and not pause or check for the video duration which is in my opinion, quite a slimy technique to make you hooked.

Due to requests, I decided to take a deep breath and join into the program and see it from the inside so do bear with me as I unveil all the other signs of scam within this program.

What is Success with Anthony all about? 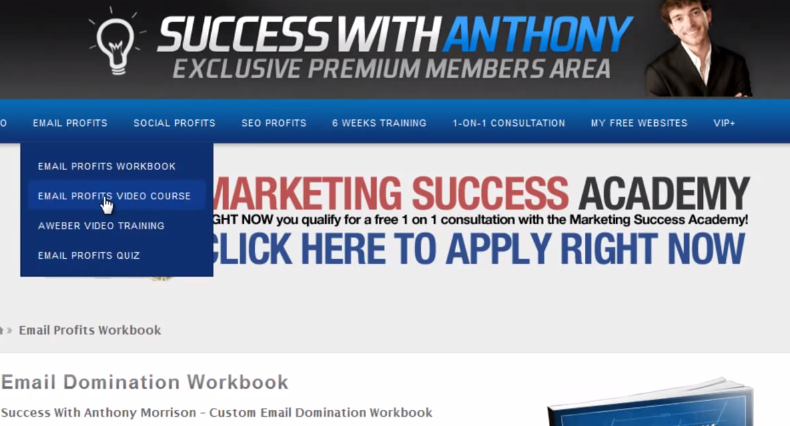 my screenshot of Success with Anthony’s member’s area

Success with Anthony is a type of a home business course aimed at helping people make money online.

Inside, you will get access to the member’s area and where you will be able to pick your topics of choice and learn.

I am not so fond of being bombarded with the upsells though, it can get really annoying after some time.

The founder Anthony Morrison has also other products and programs that he advertise but he’s more known with his expensive coaching programs which usually costs between $1,000+ to $5,000+. 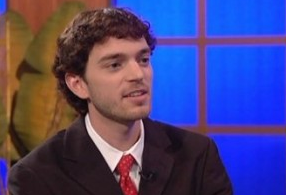 Gosh, that’s a lot of cons! Better check my #1 Recommendation here instead!

What sort of work will you be learning within this program?

Success with Anthony at least is not that overwhelming when it comes to the modules.

There are 3 sections that you’ll be learning:

Let me ask you one thing, would you follow someone who doesn’t even implement himself the things that he teaches you? 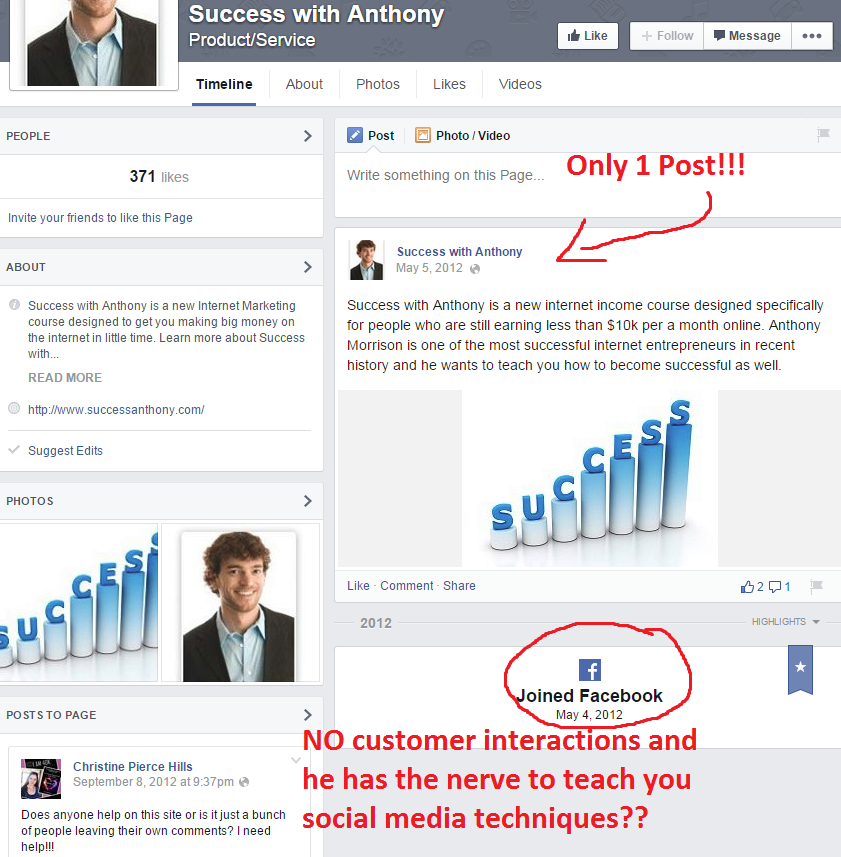 One of the modules covered is social media marketing but Anthony’s Facebook is not even active since 2012.

I have to warn you though, the trainings covered here although not many, are still NOT meant for beginners.

You will need to have prior knowledge on internet marketing such as website domain, hosting, how affiliate marketing works as well as SEO because in his lessons, those parts are not covered.

Anthony assumes that you know those basics.

Apart from that, the FIRST module itself is on email marketing which for those of you who have not had experience yet, basically means sending out hundreds of emails to your website subscribers hoping that they will buy from you.

I know, I know, what website am I talking about?

Yes, you will need a website which is another thing that I would like to point out as the lessons do not cover on how to properly build an authority website.

Instead, Anthony will teach you to create a simple site for you to market and promote to drive artificial traffic into it.

Why is this wrong?

It’s because you will NEED money to pay for services and ads to drive traffic which is also a form of hidden costs not covered by Anthony at first.

It will cost you a few hundreds more to buy clicks which will actually waste your money before you even make any.

Looking for an evergreen online business program for both beginners AND veterans alike? Read up on my #1 Recommendation here!

There are a few obvious signs of scam implemented by Anthony that you should know of:

1) You are forced to watch his sales video

I’m emphasizing on “forced” because if you’ve noticed, you can’t pause the video nor can you find any buttons to check for length.

If you’re wanting to find signs of scam, the sales video is the NUMBER ONE obvious sign because if the owner doesn’t give you free will over the video, that means he’s trying to force you into it.

Because of that, you will have to stay until the video finishes without being able to quickly run to the toilet or answer any phone calls as you want to focus.

Anthony is an excellent salesman, I have to give him that.

But maybe TOO excellent.

He knows how to get people’s attraction but that’s all that he is because once you’re hooked and decided to join, you will realize the horror that you’ve gotten yourself into.

A legitimate home business course will not have anything to hide because they know that you will surely be attracted once you are inside.

2) Use of city of origin to lure you into getting all hyped up. 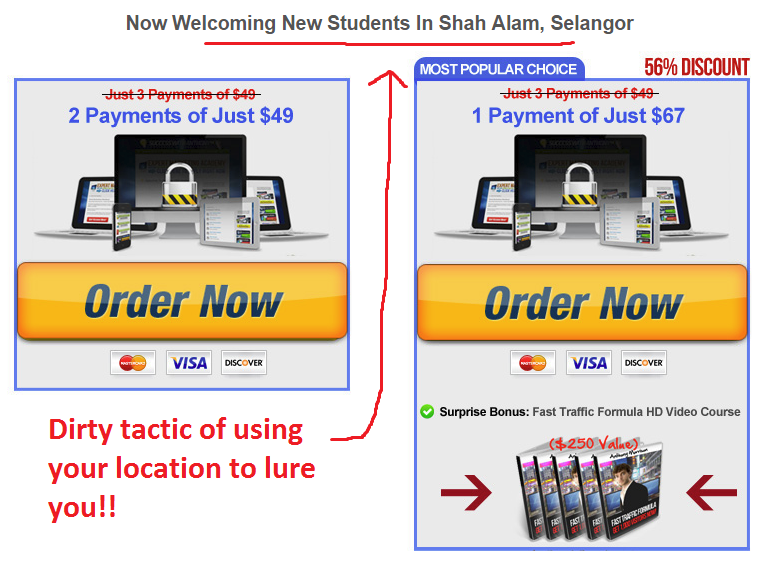 Don’t you feel excited when your country of origin pops up when you want to buy something outside your country?

Not just your country, imagine your specific location like your city being advertised and wanted by a huge corporation like “Discounts for people from New Jersey!”

It may not have a huge impact on Americans but for people who are from far away countries like Brazil, France, North Ireland, or even Malaysia (Where I’m from), we get really excited when our city comes out in the media.

A very dirty tactic used by Anthony to lure you into buying his product which is by using your city to attract you and saying that you’ll get a discount for living there is a very unethical trick to use.

I know this because it is also the very exact scam tactic used by another scam product which I have reviewed called Paid Social Media Jobs.

3) In May 2012, Success With Anthony was BANNED from Clickbank.com

Clickbank is a website which provides ebooks for you to buy and is also a platform for ebook owners to promote their products there so that affiliates may sell them and get commissions.

In the Success with Anthony program, one of the steps you are required to do is to promote his product through Clickbank so just imagine the frustration of all those affiliate marketers when they get this message…

Note from ClickBank to affiliates who are promoting Anthony’s product

So what does this tell you?

This shows and further confirms my suspicion on Anthony’s products being:

However even with his product being banned from Clickbank, Anthony is still persistent on continuing his regime because he afterwards sets himself up with other platforms in order to allow his users to still promote his product and get commissions.

So yes, you can still promote his product and get a decent amount of commission but would you still do it if you know that you’re ripping other people off to make money?

Or more importantly, would you still continue helping a scammer guru get rich by selling his products?

Unauthorized use of credit card payment suffered by a user

One of the most if not the most annoying and stressful part of this program, is the tricky and unethical pricing tactic used by Anthony.

Unlike other complicated scams who offer you a price and further discount it when you decide to leave and not buy, Anthony’s strategy is even worse.

The price keeps changing so much so that you’ll get confused before even buying!

It will keep on reducing whenever you try to click away but one false move will increase the price like nobody’s business.

Advertised price is $19, but will then be reduced to $7 when you click away as he will prompt you and to buy by telling you that you are the only one.

And believe it or not, you will also be told that you’ll be given $48 right out of Anthony’s pocket (Another sign of a scam to beware of!).

Once you’re in, the reign of terror doesn’t end there.

You will still have an upsell which is known in our industry as an OTO (One time offer) and this costs even more than the initial price as it is $147.

You will get a form appearing requiring your address, phone number and email and it asks you why you want to be on Anthony’s team.

You are paying for a scam using your own money, you are being told in the video that you will learn how to make money online, and he STILL has the guts to ask you why do you want to be on Anthony’s team?

Not only that, Anthony is a great salesman who knows how to push more sales which sometimes is not a good sign of honesty because if you do give your particulars to him, you will be bombarded with emails and phone calls asking you to join his coaching program for THOUSANDS of dollars!

Throughout my time trying out products and making reviews, if there’s one thing I’ve learned about pricing is that legitimate home business programs have free trials and does no upsells because they are confident with their quality as well as support in really helping people make a living.

Will you get quality support? 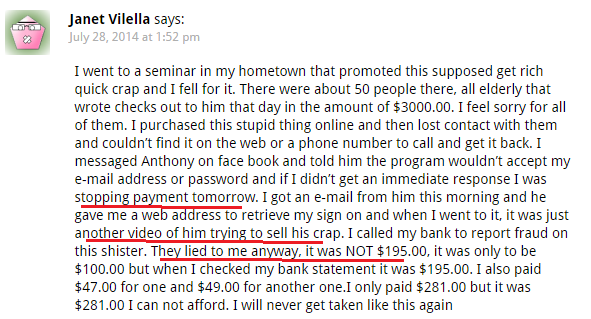 Not at the very least.

When you join Success with Anthony, you will be all alone in the program, WITHOUT a community to mingle with and make friends.

In the internet marketing world, my advice to you is to find a program that at least have an online community so that you are able to make friends and ask for advice whenever you’re stuck because believe me, technology can get confusing.

I personally got stuck multiple times on my quest on building my own legitimate internet business,

Success with Anthony has no mentions of any community and true enough, you will never find a real community.

If you try and find Success with Anthony on Facebook, there is NO interaction whatsoever!

It’s clearly a scam and so the only way for you to get help is to send a support ticket and hope that they will reply.

Success with Anthony vs Wealthy Affiliate

If you’re looking for an online business education program, my #1 recommendation to you is Wealthy Affiliate as the benefits are certainly much more compared to Success with Anthony.

You have a community to mingle around and ask for advices for seniors, you have free websites with hosting, and you can start going to the online classrooms for free.

Here’s an overview in a nutshell:

Another unsatisfied user of Success With Anthony

Though not up to its hype, Success with Anthony does actually teach you how to make some money online.

However due to the slimy unethical techniques, the complicated pricing tactics, the lack of support as well as fact that it was even banned from Clickbank due to the high refund rate, Success with Anthony is definitely SCAM and receives a rating of 25 out of 100.

If you’re interested in looking for an honest way to make start your own viable business for free, I advise you to check out my #1 recommendation here instead.

Also, do share your thoughts and experiences regarding Success with Anthony as every bit of information helps us avoid scams better!

10 comments to “Success With Anthony Review”