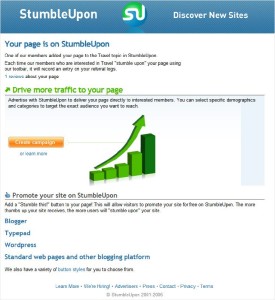 Have you ever gotten too lazy that lifting a finger feels like the end of the world for you?

Here’s something that will suit you well – StumbleUpon!

So what is StumbleUpon?

It’s a form of a website where you can just literally get things stumbling on to you instead of finding them yourself in Google.

StumbleUpon has helped websites gain traffic enough to be known all over the world.

In fact, did you know that StumbleUpon even surpassed Facebook as the greatest source of traffic?

But still, not many have heard of this peculiar yet interesting software.

And if you’ve visited the website, you would have no idea what to do or what it can do for you.

Especially when you see the world “Stumble” which almost doesn’t make any sense.

To answer that, let’s look at…

It’s very hard to get people interested enough to start a conversation on your website don’t you think?

StumbleUpon uses a unique voting system which visitors who like can vote.

But is this important?

YES because the more votes you get, the more exposure your website blog gets thus boosting your traffic source.

2) Ethical way of promoting your blog

People are tired of getting bombarded with offers non-stop, so much so that they can already expect scams.

But when using StumbleUpon, you attract people by not promoting at all.

3) Indirect way of getting Google ranking

Not many people know this but StumbleUpon is actually one of the several websites who actually give you a legitimate backlink to help boost your blog.

Why I say legitimate you ask?

It’s because after the recent Google Panda and penguin update, backlinks play a very small role in increasing your Google ranking because of the fact that many scammers abuse it.

But StumbleUpon can in fact, help your website grow up the ranks because of their reputation so you’d be wise to make use of this.

Should I use StumbleUpon?

Ohh, StumbleUpon is capable of many things friend.

So I suggest EVERY website, blog or anything online with attractive contents to try out StumbleUpon.

If you believe that you don’t have an attractive content, then make a story out of it!

Everyone loves a story they can relate to.

There are many benefits of using StumbleUpon for bringing traffic to your website so why not give it a try?

For more information of bringing traffic generation to the next level, check out my review of Wealthy Affiliate here.