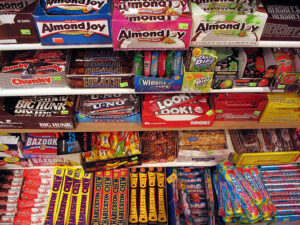 I was reading blogs online and I suddenly stumbled upon this peculiar guy’s site.

He was slamming on internet gurus which made me curious so i read on. He was upset because he was tricked a few times. And I was thinking to myself, “A few times and he’s down? What a loser”

Then it hit me – I was EXACTLY like how he was.

I wanted to earn money online but I wasn’t determined enough to go through the hard part. I was so attracted by the various make money online offers or so called “candies” that I bought almost every single one of them.

Eventually, I realized that I wasn’t actually focusing on one course and completing it.

I was focusing on almost EVERY one of them because I wanted to earn money fast and in the end I didn’t make any money at all.

I refused to believe it was my fault to begin with so I blamed and discourage all the other people who were doing internet marketing.

After some time I almost gave up but I decided to give this online marketing thing one last shot.

I didn’t want to let all that money I spent to go to waste so I took a bold step and tried one product and completed it. I was extremely happy when I saw my first $28 bucks in Clickbank.

Being determined, I gave myself hope to buy another product in order to get money faster.

It was a push button software and I paid over $200 and finished it and went to sleep straightaway (It was at night and I was tired). The next day I opened my mail first thing in the morning and to my surprise…..nothing.

At that point I realized that not all products are real. I learned that there are no way to earn money overnight if you just started because success doesn’t come overnight.

But that didn’t stop me from going on.

I started to weed out the useless ones and keep the ones that do work and after several months, I finally reached my first $1000 bucks. Yaay!

I knew success takes time but I didn’t know it takes THAT long. So I did more research and scouring until I came across this email that changed my whole life.

I was still skeptical at first but the free starter account was enough to convince me.

There’s nothing to lose so I went on and tried.

There were a lot of information to absorb that it seems so overwhelming at first, but I took a deep breath and followed exactly what the other members told me.

Whenever I got stuck, they helped me out and to my amazement, I finished it less than a week! I started earning money 12 times more than my previous online techniques and it’s all thanks to this chap Russel Brunson who I never even heard of.

The main point is, I know it is very tempting to try new product launches.

Trust me, I was hooked too.

But unless you choose one product and stay with it to the end, none of those products will help you make money online.

But it’s just something to think about.

Before trying out Wealthy Affiliate or even any other products, have a clear goal and use common sense.

Try to control your emotions however attracted you are to that candy, focus and have hope. As Anne Lamott said, “The reason I never give up hope is because everything is so basically hopeless.”

So try your best to choose one things and stick to it till you get some results. You can start the same way as I did here.