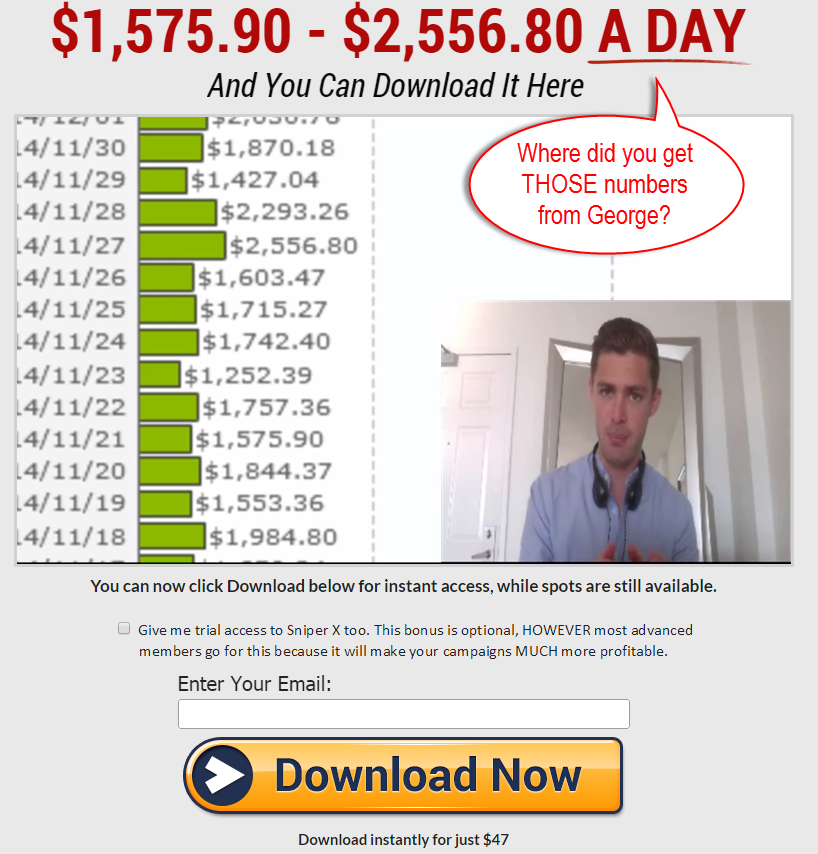 I was very reluctant to give Google Sniper 3.0 a go as both the previous versions are both scams and you know what they say about these types of people… “Once a scammer, always a scammer”

If you haven’t seen my previous Google Sniper review for the 2.0 version, you can do so here.

But after having so many request from friends and subscribers alike, I decided the best way for me to tell you guys to avoid this program, is to show you how it looks like from the inside so here’s my full review of Google Sniper 3.0.

Golly, that’s a lot of Cons! Better check out my #1 recommend program here instead! 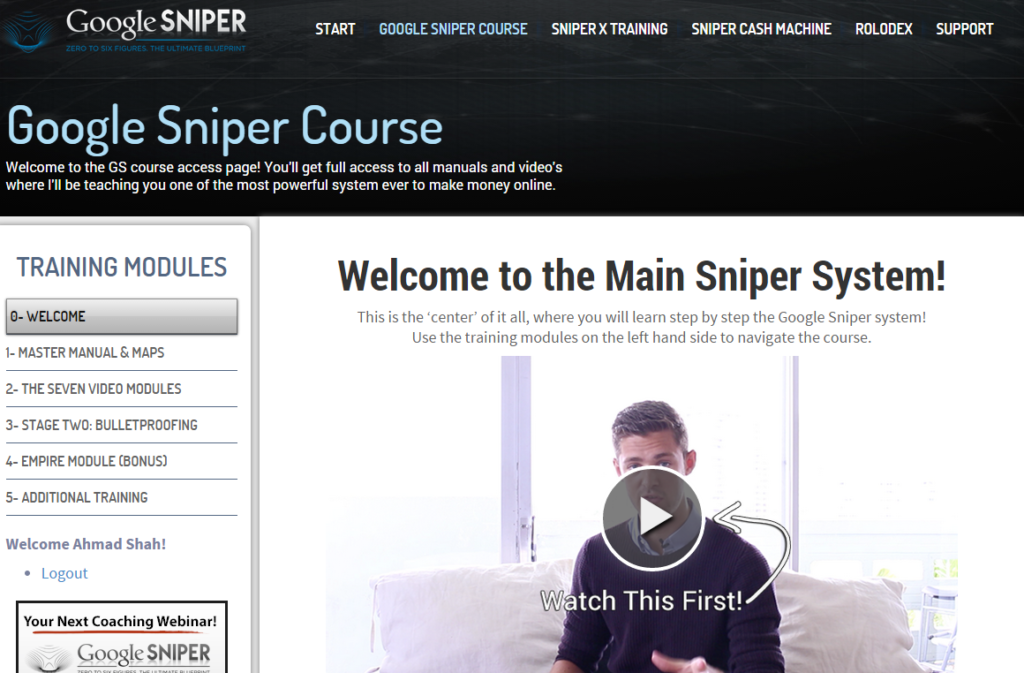 Created by George Brown, Google Sniper 3.0 is an Internet Marketing course which teaches you how to make money online by finding less competitive niches and build websites around it.

So yes, the majority part of course will be on building websites.

However unlike other website building courses, Google Sniper 3.0 focuses on making you build many low quality websites instead of focusing on building a proper quality website which is something questionable.

You will be taught on focusing on quantity more than the quality of a website so that means the end-results of your Google Sniper websites won’t be as impactful as you thought it would be as it won’t be filled with the proper information it requires.

I feel really bad seeing how many people get scammed with this program because even until today, I still get question like “Does Google Sniper really Work” or “Is Google Sniper legit” which shows that George is a master when it comes to attracting people to buy.

If you are really keen on checking out this program, I recommend you to look for a Google Sniper free download instead because it is simply not worth the price advertised.

Would you believe that Google Sniper 3.0 DOESN’T even have tools for you to use?

Instead, George recommends you to go to do it externally like going to BlueHost for web hosting, going to oDesk to outsource and SEObook.com to learn about SEO (Aren’t YOU supposed to teach us that?)

However George does provides training which are:

There are some things about this program which really ticks me off which I thought it’s best for me to share with you and elaborate more on.

A lot of my friends who tried Google Sniper 3.0 told me that their email accounts were banned and that they were even locked out from their own social media networks.

After digging more into that, I found out that the methods taught by George were not only black hat, they were also targeted on forcing you to leverage your social media to promote to your close friends hence the locking of the accounts because someone might have reported you as a spammer.

At one point George will tell you to promote to your families and friends (Which is already not a good idea) but when he said that “They will spend because they trust you”, it is no wonder that certain people actually do that (Some people can get too blinded with promises of money).

I’m not very fond of promoting things to my family and friends because doings stuff like that is not only unethical, you are also taking a huge risk and making yourself look like a greedy fool which will push your loved ones away from you more.

Plus, who in the right mind would promote a scam to someone they care about? 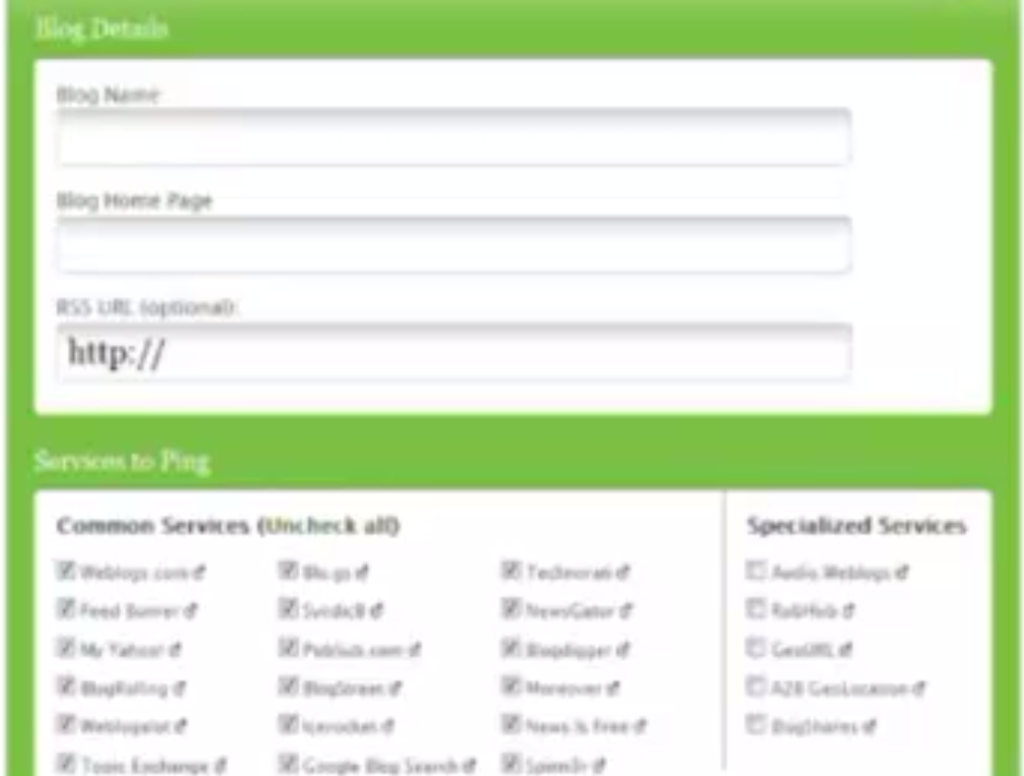 One of the videos on Google Sniper 3.0 which is very low quality. I mean come on! This caption looks sharper than that video!

Although Google Sniper 3.0 is a new version, NOT all of the lessons are new and so because of that, there is a mixture of videos from the previous versions of Google Sniper.

I am totally fine with mixing lessons because as long as they are useful, it is still helpful, isn’t it?

However, I am NOT fine with inconsistent video qualities because not only do they hurt your eyes, it can get pretty annoying when you’re trying to stay focused as one video is HD while another is 360 pixels.

The videos are fairly long as most would take around 40 minutes to an hour half so watching low quality videos can give you a headache as it had given me.

3) Google Sniper 3.0 is not much different than the previous versions. 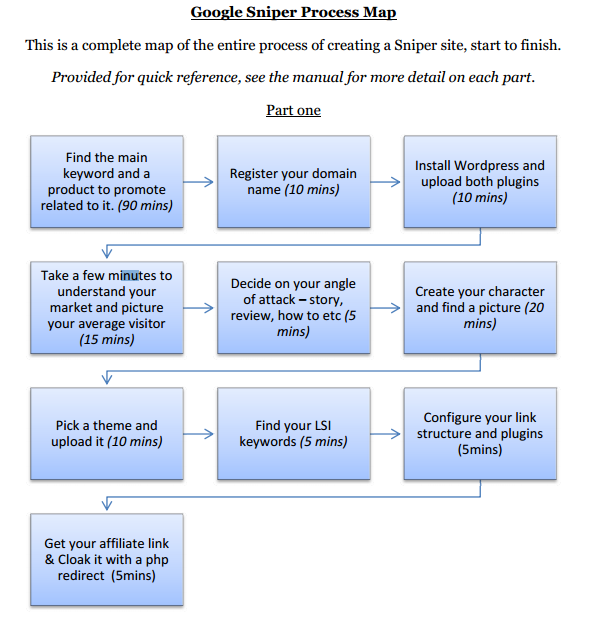 How would you feel if a new product that you love releases a new version but has the same features?

Although there are new videos, that is only some of them as most of which are mere lessons from the previosu versions.

How would you feel if you spend a lot of money on the new iPhone 6 but turns out it is exactly the same as iPhone 5 only that it looks nicer from outside?

If you’ve spent your money on the previous Google Sniper 2.0 (Here‘s my review on that), you can already see how Google Sniper 3.0 would look like which is why I would advise you to stay away from this program.

4) George lying about the price! 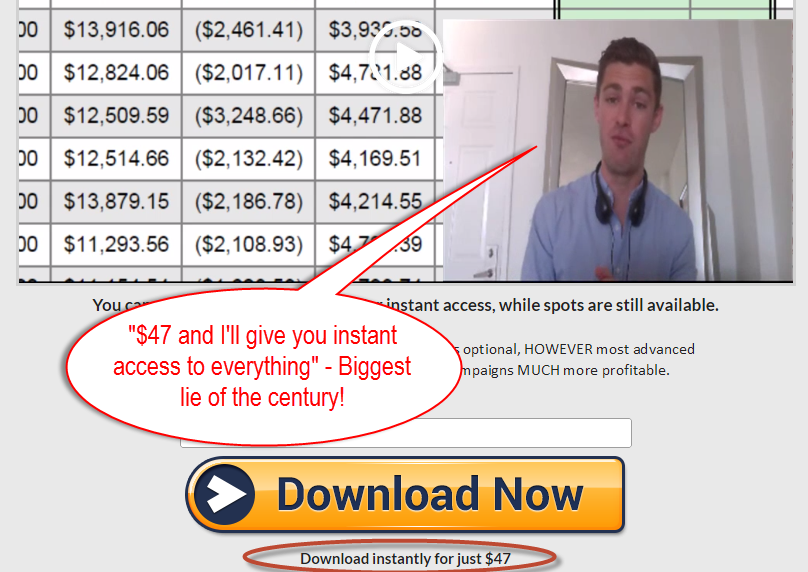 Don’t you just hate it when someone who you are supposed to trust, lies?

Maybe lying comes as second nature for some but in the business line, lying is unacceptable.

Banks won’t trust you to give out loans, other companies would blacklist your name and even your friends would start to doubt their trust in you.

In the sales video, George builds up your hope by saying that he is there to help you succeed online and because he appreciates your eagerness, he claimed that “Just $47 and I will give you everything”

However once you made your payment, you will be brought to a page which tells you that you will be billed $47 monthly as future payment.

The monthly payments aren’t all actually, there will also be upsells and speaking of which…

Unethical placing of the skip link

Some slimier scam gurus would go above the line and say things like “I will only show you this once” which works even better at tricking people into buying.

BUT all of those gurus still add a CLEAR skip button which gives you a choice to continue without buying.

George on the other hand, FORCES you to spend more time at the upsells by making the continue button almost invisible – He made the font size small, he made you scroll all the way down and he tried to camouflage the link by colouring it grey so that you won’t see it!

That is a very scammy and unethical way of forcing people to buy!

It took me a while to look for that link, just imagine how others who are color blind or long-sighted would feel – They would be forced to buy the upsell in order to continue!

George’s upgrade buttons and links are huge but when it comes to allowing you to pass through freely without buying, he made the link so small that you have to really fumble around to find it.

Slimy tricks like this is what makes my blood boil and it is exactly why I am on this quest of uncovering scams on the internet.

Does It Really Have a Community? 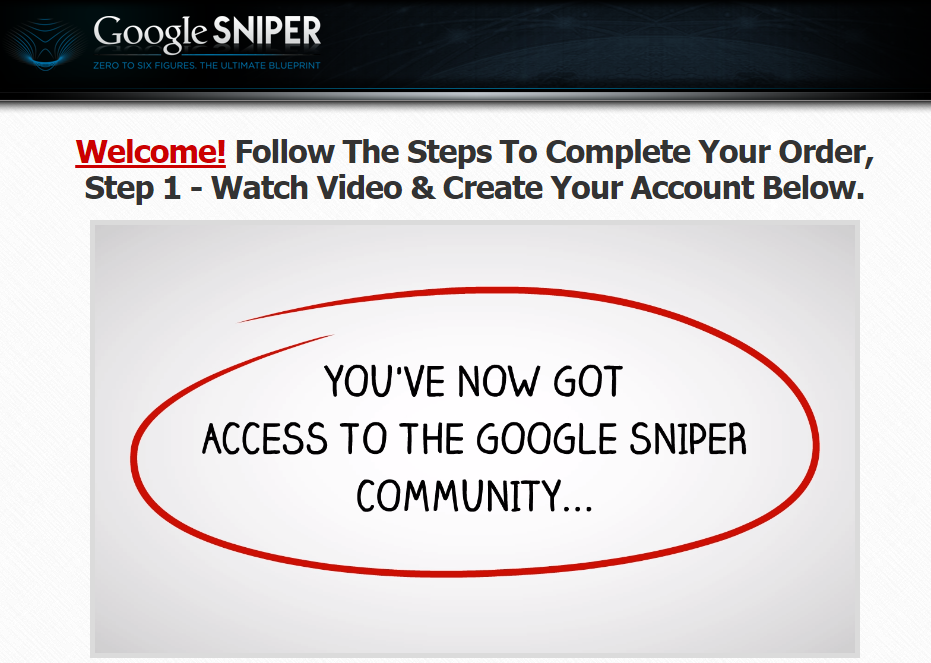 Another lying claim made by George on one of his videos

“Finally something new on Google Sniper!”

In the sales video, George made another claim by saying that “You’ve now got access to the Google Sniper Community” which personally got me really hyped up to see.

But as soon as I got into the member’s area, there are NO mentions of any communities whatsoever!

You will literally feel alone in the program with nobody to talk to or ask advice from and trust me, you need a community for Internet Marketing as it will help ensure you success.

So I set out to Facebook to find a Google Sniper 3.0 group and see for myself and here’s what I found… 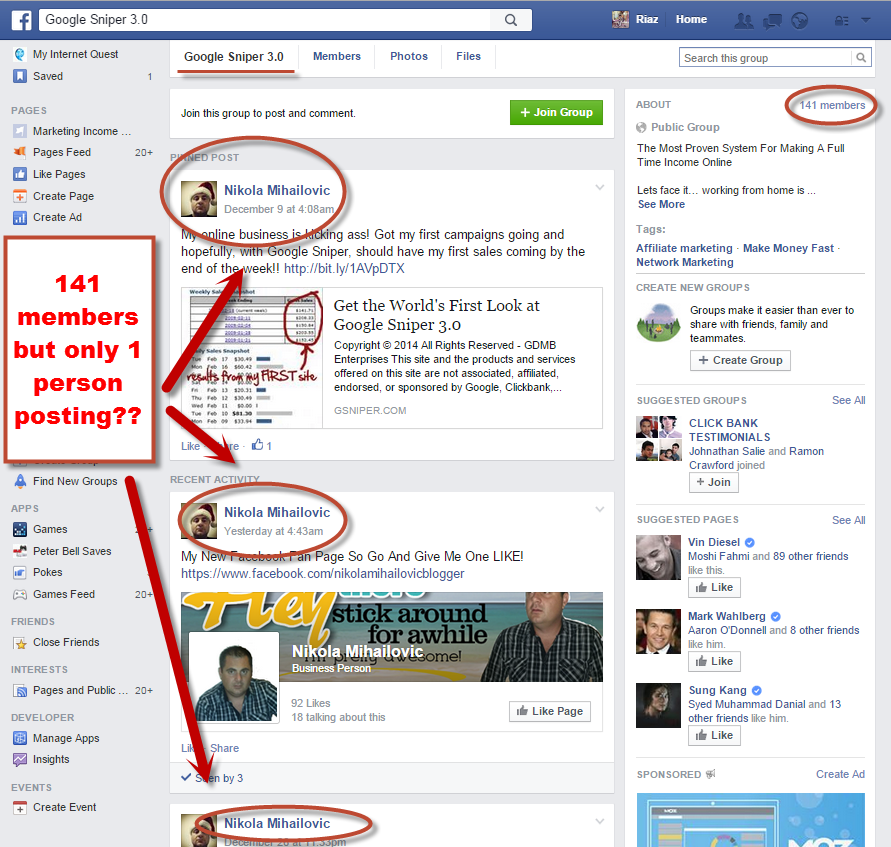 As you can see, there are 141 members there but only ONE person does the posting!

It is completely barren!

Nobody is communicating with each other, nobody asks for help or anything, and George himself wasn’t there to inject motivation and bring hope.

Google Sniper 3.0 has a sorry excuse for a community.

Want a Program With A REAL Active Community Which You Could Learn and Get Help Easily? Find Out More Here!

If a program is so legitimate, I believe that it’s pricing should be done ethically like how other normal businesses do, don’t you think?

Google Sniper 3.0 on the other hand, uses slimy pricing tactics and hidden upsells which you will never expect from the sales page alone.

Do I recommend Google Sniper 3.0?

Google Sniper 3.0 teaches you how to build websites according to niches that are less competitive.

However what most people don’t know is that George DOESN’T provide you with the necessary tools for building a quality website.

Instead, you will be taught on how to build many small low quality websites which doesn’t really work unless you have prior knowledge on building websites.

A proper way to build a website is to focus on building it one at a time so that your end result will always be a winning high quality website that you will be proud to call your own.

There is a program which I highly recommend you to join instead called Wealthy Affiliate which is also an Internet Marketing course as it gives you more for less compared to Google Sniper 3.0.

Unlike the hype that George uses to blind innocent people into buying, most of the things he said can actually be gotten for free!

Wealthy Affiliate is more effective on helping you build a quality website that you will be proud to call your own.

George said that “No other program can find less competitive niches to target on apart from Google Sniper 3.0”

Well based on what I learned from Wealthy Affiliate, anyone can do that and it is called keyword research.

For example, here’s a random keyword search I did on “Does anyone use Google Plus?”… 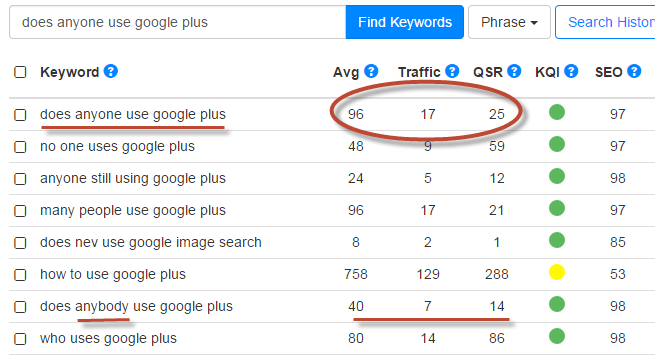 Based on the results, this keyword has full of potential as it ONLY has 25 competitors (also known as QSR) and better yet, I even found out that if I replace “anyone” with “anybody”, the number of competitors will drop to 14!

So can I use this keyword to rank on the first page of Google? 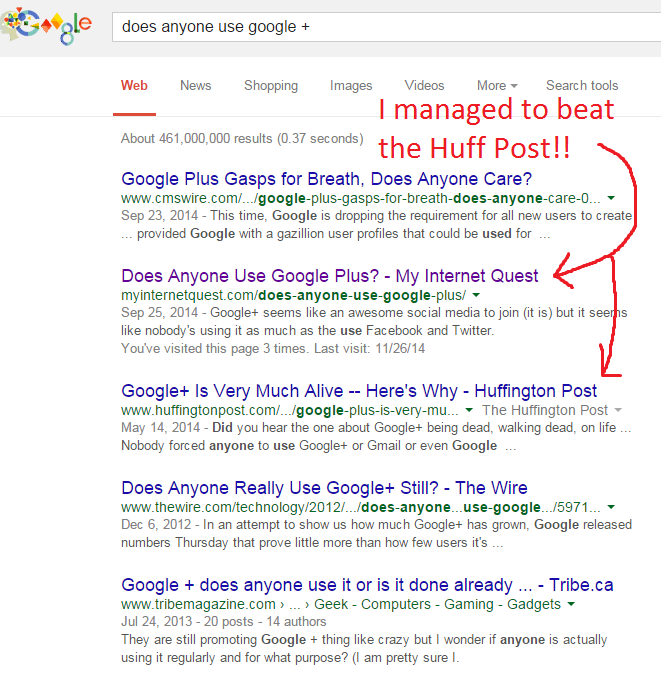 Google search results for “Does anyone use Google plus”

And you can too by saving hundreds of your money by NOT joining Google Sniper 3.0…

Google Sniper 3.0 works almost the same as its previous versions so I cannot deny the fact that you can make money from it.

However due to the unethical methods taught on building websites, the hidden upsells, and the spammy social media lessons, Google Sniper 3.0 is indeed still a SCAM and receives my rating of only 15 out of 100.

If you’re interested in making honest money online by building a viable business online, do check out my #1 recommended program here instead.

Thanks for reading this long review (Took me 8 hours), do share your thoughts and experience as I’ll be more than happy to reply 🙂 .