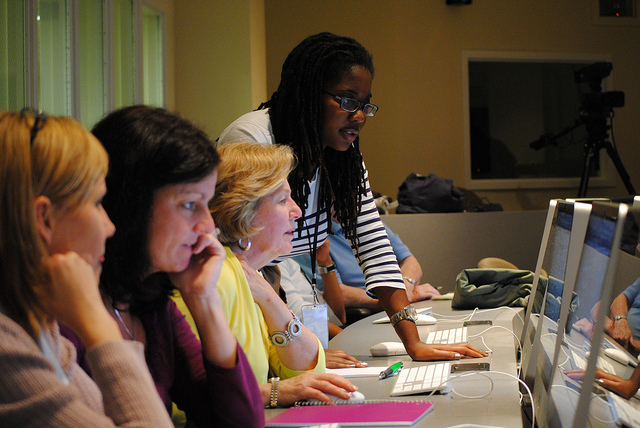 Did you know that 74% of consumers prefer to receive emails when it comes to commercial communications?

Email marketing is rapidly changing the way we communicate with people let alone with potential consumers and solo ads being a branch of it, means it’s a great potential for business.

Sure doing solo ads sound easy (it is) but anyone can mess it up if they are not careful, or if they don’t prepare before sending those emails so do continue reading to know more about how you can make it work baby.

What is Solo Ad About?

Solo ad is a form of Email Marketing, just that it is more specific to highly targeted email-subscriber lists instead of the usual broader audience.

It is very costly (costs around $30-$110) per 100 clicks which is why you need to do it right because you wouldn’t want to spend all your money for nothing wouldn’t you?

But unlike traditional email marketing which only aims to create brand awareness, solo ads are targeted solely for profits.

And to do that, it means your offer needs to be of great value and should be a high converting one.

There are 2 forms of Solo Ads which are the solo ad for giving free offers and the “Direct sale” solo ad which aims at jumping head-on to try and sell your product which, is highly ineffective today.

Nowadays people appreciate if you put in more effort to give information for free before they decide to buy anything from you because they like to be pampered.

Which is understandable considering the amount of spams everyone is getting today and this is also why blogs make loads of money because they revel in giving free information (Read here to know more about blog monetization).

So the most effective way of doing solo ads today, is by giving something for free (Usually an e-book) in exchange for the person’s email.

After getting his email, you have his interest which means that you can start doing your own email marketing to sell your product to that person which after that, is no longer a part of a solo ad.

The technique after a solo ad is called sales of which your aim should be to try and make your subscriber buy your service or product you’re offering.

Are There Any Risks involved in Solo Ad?

Everything that we do has a risk or two and solo ads are not without.

Besides the expensive cost for clicks, here are the risks involved with solo ads…

What do You Need in a Proper Solo Ad?

If you already tried a few times and realized that the results are not up to your expectations, then here are some things you should know of…

Are Solo Ads For You? –Why Internet Marketers do What They Do.

If you’re wondering if whether or not solo ads are for you, then there’s high chances that it really might not be for you after all.

If you’re looking for ways to create brand awareness on your product or company, then solo ad is definitely not for you because there are cheaper methods on doing email marketing and that is what other corporate companies are doing.

However the reason certain Internet Marketers go for solo ads is because of one reason only – to make money with the least amount of effort spent.

However solo ads are a tricky business because the most sales that you will get is usually around 5% which means that whatever the product that you’re selling, it must have a very effective sales funnel which will make you more money in the long run.

If you can’t see that your product can make you that much money, then solo ads are probably not for you…unless you have a list of subscribers of your own. 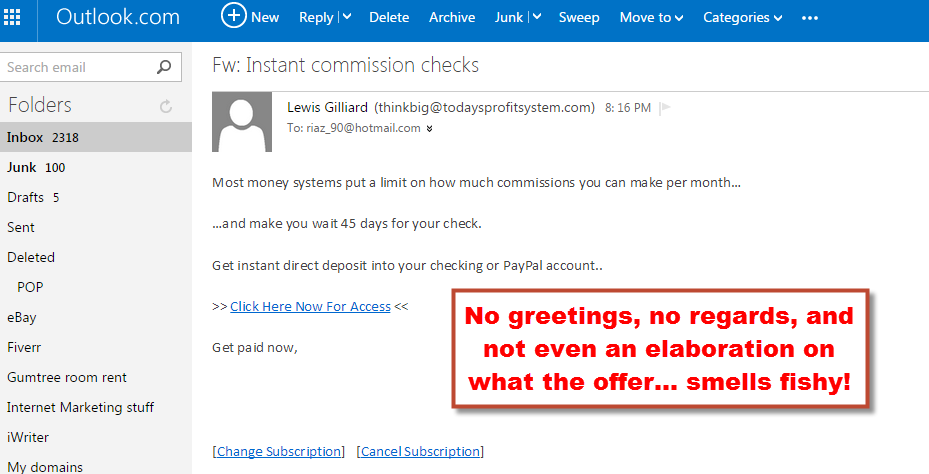 A terrible copy of a solo ad, wrong in so many ways!

Can you tell me what is wrong with that solo ad? Here’s a breakdown…

If Lewis’s solo ad were to pop-up in your email, would you even click on that?

This is one of the worst solo ads I’ve ever seen which is why you have to avoid that when writing a solo ad of your own.

To know how a good solo ad should look like, here’s a screenshot of Patric Chan’s copy for you to get inspiration from… 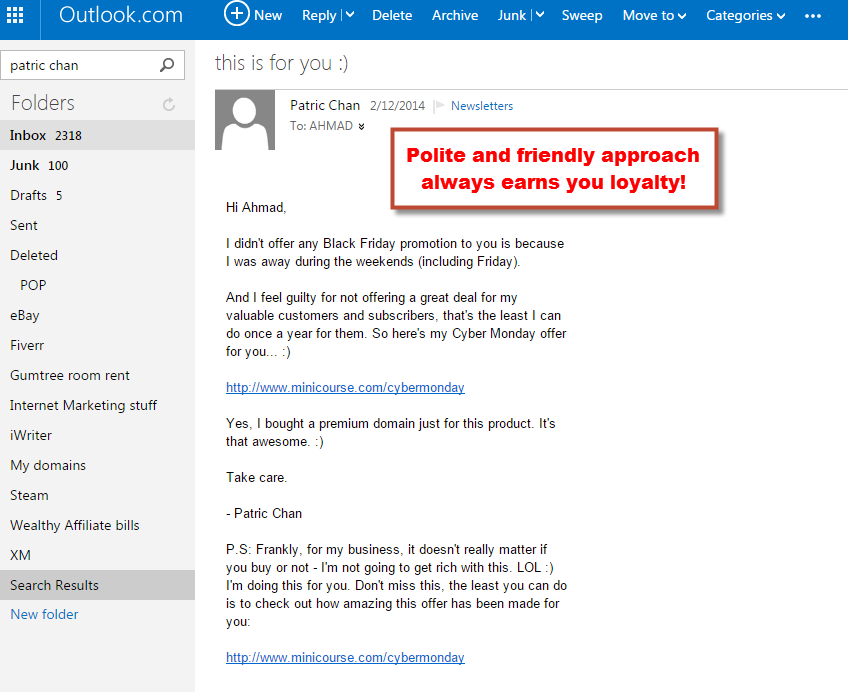 A much better approach don’t you think?

Patric Chan is one of the World’s most renowned Internet marketers who have had years of experience and make classes of his own so it’s no surprise that his email works.

Furthermore, Patric also showed that a humble and friendly approach is often the best as not only did he give greetings and regards, he also managed to synchronize his offer with Black Friday which was already over in a way which is really cleverly put.

Story-telling is an essential step in solo ad writing and if you are able to synchronize your story with whatever it is that you’re offering, I won’t be surprised if you come back tell me that you make 5 sales from your solo ad campaign 😉 .

Solo ad is just another form of email marketing so yes, they do work well.

But the reason why many argue that it doesn’t work is actually because of their own ineffective writing style, their lack of education on synchronizing the offer within the email and of course, their recklessness in putting “money” on a pedestal so much so that they didn’t know that  they’ve abandoned quality service along the way.

Do share out whatever it is that’s in your mind below as I’ll be more than happy to hear them out 🙂 .

List-Building Tips, Solo Ad Tips
One comment to “Solo Ads Don’t Work? …Or Do They!”